To facilitate safe, secured and efficient interbank payment system, Bangladesh Bank introduced Real Time Gross Settlement (RTGS) system on 29th October 2015 as part of its inclusive digitalization initiative. It opened a new horizon in the arena of large value time critical payment and settlement in the country. It was implemented with the financial assistance from Asian Development Bank and technical support from the World Bank. The central RTGS system was developed by the Swedish company CMA Small Systems AB.

RTGS is an electronic settlement system where transfer of funds takes place from one account of a bank to that of another bank on a real-time and on gross basis. Real-time refers transactions that do not need any waiting period. Transactions are settled as soon as they are executed. System is designed to settle high value (more than or equal to 1, 00,000 BDT) local currency transactions as well as domestic foreign currency transactions. It is worthwhile to mention that more than 7000 online branches of 55 scheduled banks are currently connected to this system out of total 11000 bank branches of 57 banks in the country. The system is currently allowed to handle only local currency, however domestic foreign currency transactions are expected to be launched soon.

Trend of the transactions with RTGS During December, 2018 to November, 2019 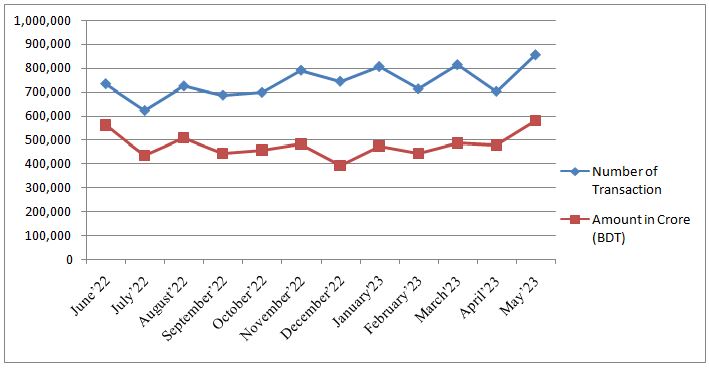